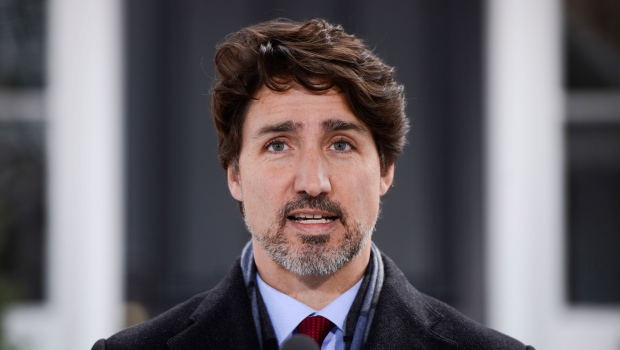 OTTAWA — Prime Minister Justin Trudeau says shutdown of the Canada-U.S. border to all non-essential travel is likely going to be one of the suite of public health restrictions set to remain in place for weeks. This comes as the federal government imposes tougher mandatory quarantine measures for returning travellers.

Over the last month, COVID-19 has considerably shaken up Canadians’ lives and Trudeau said Tuesday that it will be “a while still” before governments can consider getting the economy and other aspects of society back up and running, including allowing international visitors on Canadian soil. Though, talks are underway with the provinces about the best way to reopen things such as schools and businesses in phases in the weeks ahead.

“I know that everyone is very interested to know when things are going to get back to normal, when they’ll be able to go back to work, when we’ll be able to leave this isolation at home… The reality is, it is going to be weeks still,” Trudeau said.

This comes as some other countries that are further ahead in the respiratory virus’ curve ready themselves to ease up on some restrictions. Trudeau said Canada isn’t there yet—and won’t be for “a good while still”—despite the eagerness of many to return to some semblance of normalcy.

“Travel restrictions are going to remain extremely important in terms of containing the spread of COVID-19 in Canada and we’re going to continue to work with the Americans and people around the world, to ensure that we continue with these restrictions,” Trudeau said.

The prime minister also announced on Tuesday that effective at midnight, anyone who is returning to Canada from abroad has to have a “credible quarantine plan” or they will be forced to spend 14 days in isolation in a “quarantine location.”

This is an update to the current policy under the Quarantine Act, which came into effect on March 25, that made it mandatory for those arriving in Canada from abroad to self-isolate for 14 days, with public health officials and the RCMP following up.

Trudeau said this strengthening of the Quarantine Act will give authorities the ability to evaluate the plan presented by the person coming into Canada and determine whether it’s adequate or if they need to be placed in a location “like a hotel.”

RCMP Commissioner Brenda Lucki told CTV News on Monday that since being tasked with checking up on those told to self-isolate or quarantine, the RCMP had yet to issue a single ticket. Those caught not self-isolating face fines of up to $750,000 and/or imprisonment for six months.

The prime minister said, for example, a plan would be considered inadequate if a traveler says they intend to stay with elderly family members, or someone with pre-existing health conditions, or if they don’t have a set destination.

Offering more detail on the latest border measures, Deputy Prime Minister Chrystia Freeland said this new rule will apply to all people entering whether by air, land, or sea and applies to both symptomatic and asymptomatic travellers.

Chief Public Health Officer Dr. Theresa Tam will be designating the approved locations for these returning Canadians to be quarantined.

The federal government will cover the costs to put up these people, and will be responsible for making sure they have access to essential services including food and medication. Freeland said this move was made following talks with the premiers and is an “additional layer” of protection for Canadians against the pandemic.

After taking Sunday and Monday off to spend time with his family at Harrington Lake, the prime minister’s rural retreat 30 minutes’ drive from Ottawa in Quebec, Trudeau updated Canadians on the latest measures the federal government is taking to combat the COVID-19 pandemic.

In addition to the latest border measures, he announced almost $130 million in new support for Northern communities to improve health services, make it easier to afford food and other essentials, and aid businesses in the North.

He also said to expect more announcements this week for help for students, essential workers, businesses’ commercial rent, and sectors that have been particularly hard hit.

“No matter where you live, in a small community or a big city, we’re here for you,” Trudeau said. “Whether it’s the tourism sector, the airline sector, or the oil and gas industry or others, we will have more to say on that shortly.”

Provinces have already begun extending their emergency orders into May, and supplies continue to stream in.

The prime minister also faced questions about the crisis inside long-term care homes, and he said he is aware that more needs to be done. Trudeau said the federal government is in talks with the provinces about more financial support for long-term care workers, such as sending salary top-ups to provinces that pay workers at publicly-run seniors’ facilities.

“We tend to devalue the work of caring for people, and I think that this is an opportunity for Canada to think about how we value those who serve the most vulnerable in our societies,” Health Minister Patty Hajdu said on Tuesday.

Hajdu said that while it will be a big project, it could be a “silver lining,” of the COVID-19 pandemic to “to think about how we will move forward from this time, and really refocus our efforts to make sure that everybody has an opportunity to age in dignity and with the care that they deserve at the end of their life.”

Essential protective gear continues to come in, both from international and domestic suppliers, including four planes worth of N95 masks, millions of pairs of gloves, and soon more protective gowns.

Canada has also recently granted an Ottawa bioscience firm approval to produce and distribute of a device it claims can produce COVID-19 test results in less than an hour.

Speaking to this, Trudeau said more than 430,000 Canadians have now been tested for COVID-19 and these new technologies will accelerate that.

At the end of his remarks Trudeau had a message for everyone who has lost a loved one to COVID-19.

“If you’re grieving, know that you’re not alone. We are here for you, even through this incredibly tough time, and you remind us why it’s so important to do everything we can to keep one another safe. We all need to do our part. We can’t let up now,” Trudeau said.

On Saturday Trudeau joined a small number of MPs in the House of Commons for the second emergency sitting since the pandemic was declared to pass the $73-billion wage subsidy program. In the agreement with opposition parties to fast-track that bill’s passage, the Liberals agreed to implement further support measures for groups that have fallen between the cracks of the existing emergency benefits.

During his own address in advance of Trudeau, outgoing Conservative Leader Andrew Scheer said his caucus continues to propose “constructive solutions” to Liberal policies and is pushing for the continuation of “responsible” in-person sittings of the House of Commons.

As things stand, Parliament is set to resume the week of April 20 in both chambers, barring an agreement to extend the suspension. Scheer said his party’s support for putting off a full resumption of House business will require an agreement for “regular” accountability sessions.

Citing recently released government documents about the early planning for and response to the COVID-19 pandemic which could see additional waves in coming months, Scheer said “Canadians must be assured that the government has a plan to get ahead of those waves, and eventually get our economy back on track.”