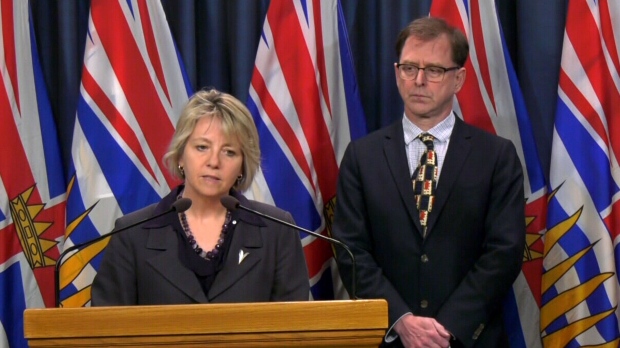 VANCOUVER — British Columbia has declared a public health emergency after recording another three deaths related to COVID-19 and identifying another 83 infections.

The third is a man in his 80s who lives further east in the Fraser Health region that spans from Burnaby to Hope.

Those deaths and the staggering jump in cases – the largest single day increase recorded anywhere in Canada so far – have prompted the government to declare a provincial emergency.

“We’ve taken a number of unprecedented measures in the last few days,” Dr. Henry said. “This declaration of an emergency allows me to be faster, more streamlined and nimble in the things we need to do right now.”

The province has already banned gatherings of more than 50 people, closed public schools from kindergarten to Grade 12 indefinitely, and postponed non-urgent surgeries in an attempt to curtail the spread of the virus.

Henry said declaring an emergency is just another tool in the province’s toolkit for fighting COVID-19, and that she felt the time was right to use it – beginning with an order to close bars and clubs.

The provincial health officer stressed the need for social distancing – keeping people one or two metres away from each other as often as possible – and said certain establishments just aren’t able to comply.

In Vancouver, bars and restaurants had already been ordered to remain closed to the public Tuesday in order to prevent people from gathering for St. Patrick’s Day.

The rationale behind social distancing is grounded in the way COVID-19 is most commonly known to spread: through tiny droplets that people emit when they cough or sneeze.

Those droplets can fly for a couple metres, according to the B.C. Centre for Disease Control, and potentially end up in the mouths, eyes or noses or the uninfected.

Tuesday’s announcement brings the total number of COVID-19 cases identified in B.C. to 186, and the total across Canada to 568.

The only fatality recorded outside British Columbia so far is a 77-year-old Ontario man who was suspected, but not yet confirmed, to be carrying the virus when he died.